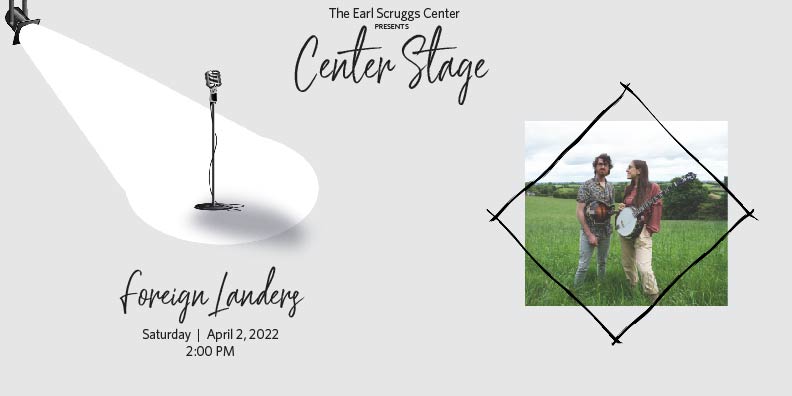 Cash bar will be available.

The Foreign Landers is a duo hailing from opposite sides of the Atlantic united by their love of bluegrass and traditional folk music and their love for each other. Together they combine the musical styles of their respective homelands, along with their instrumental prowess and haunting vocals to create something new.

It was more than unlikely circumstances that brought these two together. David Benedict grew up in South Carolina playing with the only Celtic folk band in town, while Tabitha Agnew was perhaps the only 12 year-old in Northern Ireland who started playing the 5-string banjo after a chance hearing of an Alison Krauss & Union Station record. Ironically, it took each a while to discover the traditional music of their own countries, but they eventually came around. Both excelled at their instruments and found themselves playing with some of the most promising young acoustic bands on the scene today—David with the Boston-band Mile Twelve and Tabitha with both Cup O’Joe and Midnight Skyracer from the UK. With such unique common threads, there was an instant connection when Tabitha and David finally met.

Now married and based in the States, the Benedicts are finally making music on their own. Their debut EP Put All Your Troubles Away marks the first chapter in their journey together, and this adventurous recording will take you along with them to uncharted musical territories.

** All tickets are non-refundable but can be transferred to others. **

Please note that masks and 6 ft. social distancing are encouraged during any event affiliated with the Earl Scruggs Center. Thank you for your cooperation!