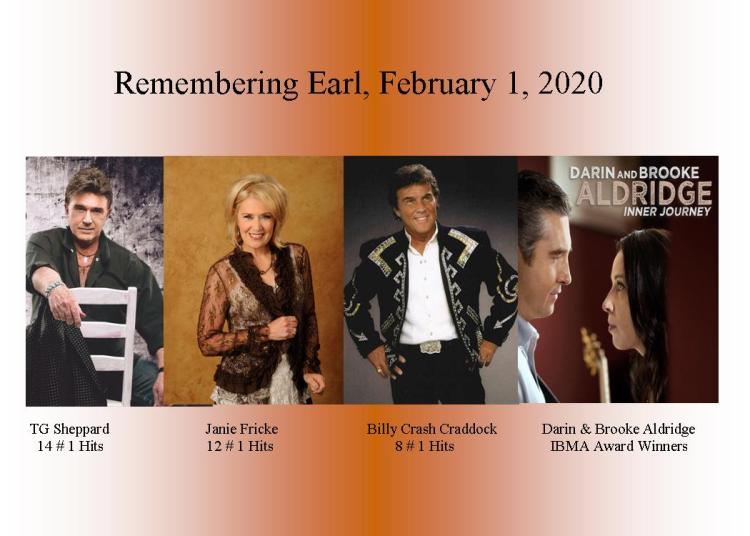 The Earl Scruggs Center is delighted to present TG Sheppard as host and emcee of this “Grand Ole Opry” style show featuring a line-up of Grammy nominated and award-winning artists.

With eight number one hits and 24 top 10 hits, TG Sheppard is ranked among the top 100 country artists of all time and is one of the most popular live performers on tour today.

Janie Fricke has gone from Indiana farm girl to internationally acclaimed recording artist throughout her career. With 12 number one hits and 23 top 10 hits, Fricke’s sound and personality have captivated audiences around the world.

Fricke has won many awards, including the prestigious Country Music Association’s Female Vocalist of the Year, and her hits include the songs Don’t Worry ‘ Bout Me Baby, He’s a Heartache, and Your Heart’s Not In It.

A native North Carolinian, Billy “Crash” Craddock, was raised on old gospel standards, folk tunes, and country legends. Now a legend himself with nine number one hits and 24 top 10 hits, Craddock has achieved every one of his career goals. He has performed on the Grand Ole Opry, has donated memorabilia to the Country Music Hall of Fame, and has played to sold-out crowds around the world.

Husband and wife duo Darin and Brooke Aldridge are one of the most beloved and successful acts on the bluegrass scene. They have placed several tracks at the top of the charts on Roots, SiriusXM, Bluegrass, and Gospel charts. Their album Inner Journey debuted in September at #2 on Billboard’s Bluegrass Chart.

In 2017, Darin was named the IBMA’s Momentum Mentor of the Year and Brooke is the reigning three-time IBMA Female Vocalist of the Year. Darin and Brooke are quickly becoming regulars on the Grand Ole Opry, having appeared 22 times, with many more to come.

The Earl Scruggs Center opened January 2014 and has welcomed visitors from all 50 states and 18 countries.  The Center engages with and serves guests from the community and world as a cultural destination, community gathering place and educational resource.  The Center provides opportunities for all to engage with and learn about the life and legacy of legendary five-string banjo master Earl Scruggs and the unique and engaging music, history and cultural traditions of the community and region where he was born and raised.