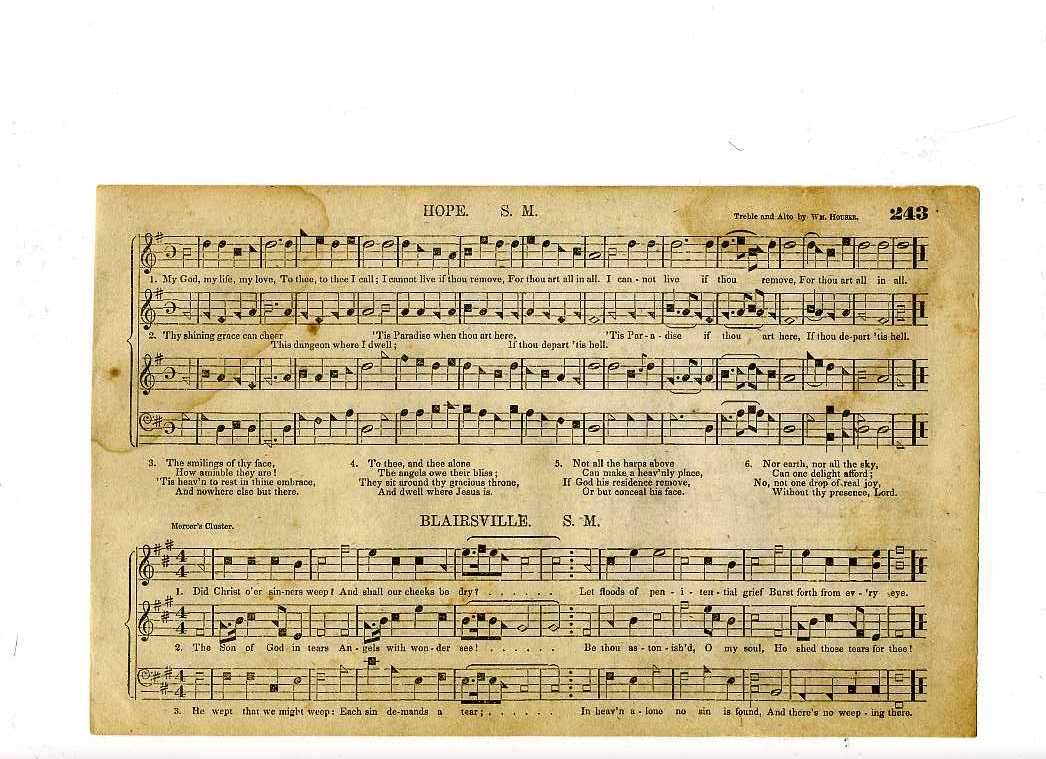 The addition of shaped-notes to religious texts was introduced during the 18th century in New England in an effort to restore congregational singing, the reading of music and the musical heritage that had perished since the early settlers came to America.  Congregational singing declined with the increase of illiteracy and the scarcity of printed music.  Singing schools utilizing shaped-notes were instituted to instruct and to encourage lively group singing.  Recently, this style of singing has gained national attention through the film “Cold Mountain” which was set in Western North Carolina. 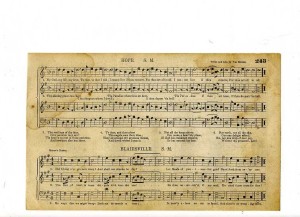 The shaped-notes appear on the musical staff in place of the round-note notation, and accurately represent the syllables of the musical scale.  Shapes are applied to give the singer a visual aid indicating the pitch of the scale degree that the shape represents.  Thus, the trapezoid        , represents DO, the half-moon RE, the diamond MI, the right-sided triangle (or flag) FA, the circle SOL, the square LA and the equilateral triangle TI.  Singing school participants learn to read the shapes and their accompanying sol-fege syllables.  Once the voice parts are mastered through the use of these “characters,” the class then sings the text or “the poetry.”

Singing schools spread throughout the East and the South with the continued westward expansion of frontier America.  The singing school master would advertise his ten day singing school in a small community and draw participants in the town and rural areas.  Singing school taught skills such as the reading of the musical staff, rhythm, singing the syllables, harmony singing and vocal production.  The song books used were religious in text, thereby making the gathering appropriate for mixed company.  Many singing masters authored or compiled their songbooks which included traditional hymns, folk tunes as well as their own compositions.

The popularity of singing schools led to a rise in musical “conventions,” an annual event which featured all day singing and usually a dinner on the grounds.  In rural areas of North Carolina, Alabama, Mississippi, Georgia and Florida, traditional singings or musical conventions are still held and many date back over 100 years.  Western North Carolina is home to two such conventions which feature the songbook of South Carolina native William “Singing Billy” Walker.  Revivalist singings have sprung up across the country from California to Vermont.  Many regions are reviving out-of-print songbooks and in New England a compilation of “lost songs” have been republished in The Northern Harmony.

The workshop will focus on learning the seven-note shaped-note scale.  Our text will be William Walker’s Christian Harmony first published in 1866.  Many old hymn favorites will be sung including “Prayer Meeting” (“Sweet Hour of Prayer”), “Coronation” (“All Hail the Power”), and “New Britain” (“Amazing Grace”). REGISTER for Shaped-Note Singing with Laura Boosinger 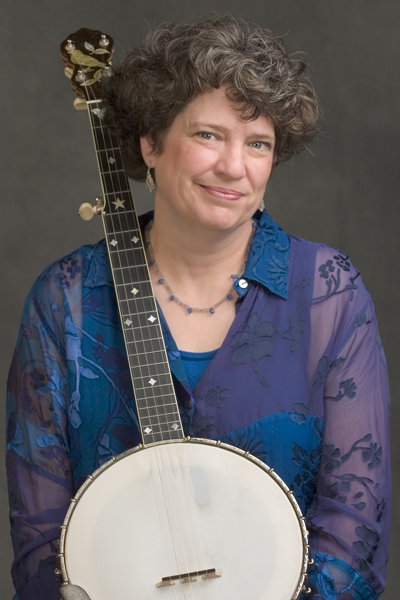 About Laura Boosinger
Laura Boosinger has been studying and performing traditional Southern  Appalachian music since she was a student at Warren Wilson College in the 1970’s.  It was at WWC where she began to learn clawhammer banjo, learned how to call southern mountain square dances and attended Shaped Note Singing School with North Carolina Folk Heritage Award winner Quay Smathers.

Laura performs solo, as one of David Holt’s Lightning Bolts, with her duet partner Josh Goforth. Her latest recording, Most of All, with Josh Goforth has received extensive airplay throughout the US  and the UK. REGISTER for Shaped-Note Singing with Laura Boosinger

“Laura presented a program for the Earl Scruggs Center before we were even open back in 2010.  We hosted a Smithsonian traveling exhibit called New Harmonies: Celebrating American Roots Music.  Laura’s presentation was fun, engaging and very entertaining for an audience of all ages from my own 5 year old son to some guests in their 70s.  We knew we would invite her back for programming when the Center opened and are excited she will be joining us to present this program about Shape Note Singing.” Emily Epley, Executive Director

“Many artists can put on a good performance and entertain, but only a very few can put on a show that mesmerizes the audience with pure music that comes straight from the heart.  Laura Boosinger is one of those rare individuals.  She can bring a smile to any face and melt any heart.  She brightens a room as if the lights were turned up.”  Friends of the Hendersonville Library