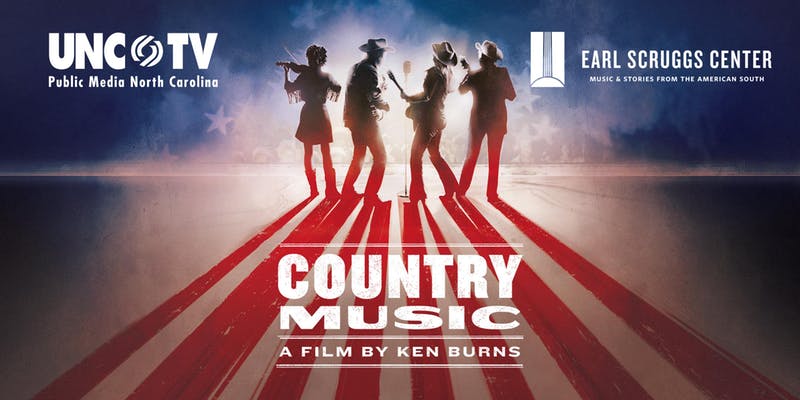 You will be treated to clips from Ken Burns’ upcoming 16-hour documentary series .The film, which chronicles the history of this uniquely American art form, features many North Carolina artists and their stories, including Fred Foster, Jimmie Rodgers, Betty Johnson and Rhiannon Giddens.

This is a FREE event, but space is limited and registration is required. RSVPs accepted on a first come, first served basis. Registration is done through a third party website (Eventbrite). UNC-TV is managing registration for this invite-only event. Please register you and your guests via Eventbrite or contact Karen Nowak at knowak@unctv.org or 877-407-0004.

More about the film:

Explore the history of a uniquely American art form: country music. From its deep, tangled roots in ballads, blues and hymns to worldwide popularity, learn how country music evolved and emerged as America’s music. The series, directed by Ken Burns, features never-before-seen footage and photographs, plus interviews with more than 80 country music artists. No one has ever told the story of country music this thoroughly or respectfully before. It’s the magic of Ken Burns and it’s sure to become as big a classic as his Civil War, Baseball, World War II, Jazz and other monumental documentaries.

This special evening is made possible with support from Earl Scruggs Center, UNC-TV Public Media North Carolina, Bank of America and WETA.