David Holt is a musician, storyteller, artist, historian and radio and television host who has collected and performed the songs and stories of the Blue Ridge Mountains for more than forty years.  This exhibit includes over 30 framed black and white portraits of Holt’s musical mentors and heroes from the 1970s to the early 2000s.  In these photos are icons such as Doc Watson (whom David considered his musical father), Etta Baker, Earl Scruggs, and Dolly Norton, as well as musicians who, while not well known, were influential in David’s life. 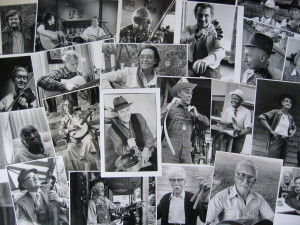 “I learned a lot more from them than simply music…. When I perform I like to think the spirits of these folks are standing behind me.” – David Holt

Artifacts and musical instruments from his personal collection are throughout the exhibit. The “Tree of Life” open back banjo custom made by Bud Soesby and Wade Mainer’s 1953 Gibson are among those on display.

In addition to making numerous critically acclaimed recordings, this four time GRAMMY Award winner is host of popular television programs including the PBS series David Holt’s State of Music, Folkways and Great Scenic Railway Journeys. He was featured in the film O Brother, Where Art Thou and was host of the Nashville Network’s Fire On the Mountain and American Music Shop. In 2016 David was inducted into the North Carolina Music Hall of Fame.

Thank you to our supporting sponsor HomeTrust Bank.