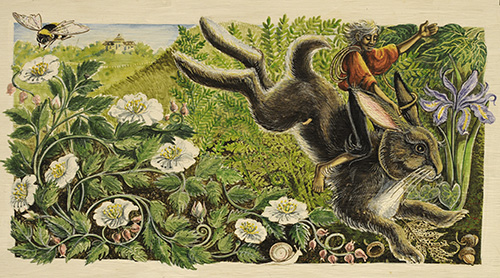 The Earl Scruggs Center announces a new special exhibition, Everyman Jack: Stories & Illustrations by Gail E. Haley, opening September 10, 2021 and running through December 23, 2021.
This exhibition displays works created by author and illustrator Gail E. Hailey for the production of two of her books, My Kingdom for a Dragon and Mountain Jack Tales. Throughout her career, Haley has written and illustrated more than 40 books and is the only person with the distinction of being awarded both the Caldecott Medal and the Kate Greenway Medal.


Haley grew up in Shuffletown, a rural township just outside of Charlotte, NC. However, she has lived all over the world including Africa, the Caribbean, New York, and the North Carolina mountains, gaining inspiration for her work and learning new things about life and humanity in each place.

Illustrations in the exhibit feature the unusual predicaments of “Jack,” a classic folk hero with worldwide origins whose stories and adventures have become entwined in Appalachian history and culture. Haley grew up hearing Jack stories and says they have been passed down for over 200 years through the oral tradition of storytelling.

Visitors to the exhibit are encouraged to follow the illustrations with provided copies of the books, learning about the archetype of “Everyman” Jack. Haley’s perspective explores the idea that Jack represents all human beings and everyone can be the hero he or she chooses to be. The exhibit also features a reading nook and an art space to inspire children to create their own tales and illustrations.

Exhibit-related educational programming includes a Cherokee culture, history, and storytelling program presented by Freeman Owle and a Community Storytelling Workshop for 7th and 8th grade students facilitated by Dr. Kimberly P. Johnson, the author of No Fear for Freedom: The Story of the Friendship 9. Other programming includes Jack Tales storytelling and a talk by author and illustrator, Gail E. Haley. For a full listing and details about programming offered by the Earl Scruggs Center, visit www.earlscruggscenter.org/events.

Everyman Jack: Stories and Illustrations by Gail E. Haley exhibits artwork on loan from the Blowing Rock Art and History Museum. Supporters include the City of Shelby as Presenting Sponsor, the Dover Foundation, and North Carolina Humanities.